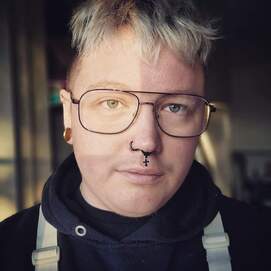 Aiden Brown - They/Them
​
Aiden is a Non-Binary Masc presenting person living in Barrie, who uses They/Them pronouns. They work as an established barber At Maverick's Barber Studio in the Georgian Mall in Barrie Ontario. They specialize in gender affirming haircuts; as well as children’s cuts for those with special needs. They also are a parent of three and an avid animal lover.

Aiden advocates within their industry about the importance of non gender specific language when it comes to barbering and hairstyling. When asked about how they strive to increase Transgender visibility in the workplace; they said “I think self expression within the trans and nonbinary community is absolutely vital and I believe it is a huge role of mine to ensure that trans and nonbinary folx have a safe space  even if it's only in my chair. To be able to express themselves freely and safely, and with non gender specific language as well as appropriate gender affirming cutting and styling. I feel I am able to accomplish exactly that.”

Aiden stated that the lack of Non-Binary Visibility currently impacts them in many negative ways.; saying “I feel that the lack of understanding in that trans people are parents regardless of what they look like, has without a doubt impacted my experience as a nonbinary person. I feel as though I cannot be true to myself instead I must fit bill of a "cis passing" trans individual so as to protect myself and as well as to protect my children. Being a nonbinary barber in a male cisgender driven industry has also posed its own set of challenges, I feel as though I must prove myself as a barber to validate the space I take up within my own industry.”

They shared that not having visibility when they were younger prevented them from fully understanding how they felt; and having the words to associate with how they were feeling for the duration of their childhood. Aiden also stated that a lack of visibility prevented themself from feeling safe in their own body, as well as safe as a person in society. When asked they said that Trans & Non-Binary Visibility means “the ability to have access and therefore have the language available that young folx need in order to feel seen. It's appropriate media representation showcasing and highlighting trans and non binary individuals in a complimentary light, and using appropriate platforms to be seen for who we are. I feel a large part of visibility is the ability to be who we are, truly and honestly and educate others while doing so all the while having the freedom to express ourselves safely. That's a big part of visibility to me as well. Safety. Without the secured feeling of safety in self expression and representation we end up feeling targeted, like an arrow to a bullseye, and our safety is the reason visibility is so important.”

Aiden also shared some exciting news, that they are having Top Surgery on this March 31st, on the Transgender Day of Visibility. They said to us “I am so excited, elated, overwhelmed, just so many emotions; however my top surgery journey has shown me how important visibility is. The number of people even within our own community who don't understand the dangers of chest binding, the importance of gender affirming surgery and the need for support  is absolutely astonishing. I am absolutely grateful for the support network of gender non conforming folx and allies that have shown up for me as a thank you for showing up for them. It's truly so uplifting and inspiring. Remember to show up, be visible and be loud about it. We cannot be erased.” 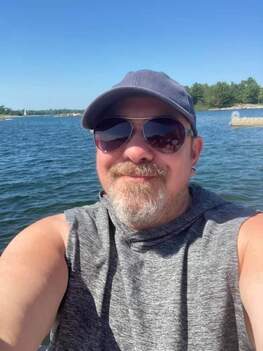 Evan McCraney is new to the community but very well known already as the Senior Program Coordinator and former Peer Support Worker in the Trans and Gender Diverse programs through the Gilbert Center in Barrie. As a newer resident to the Simcoe County area Evan has found it hard in meeting new friends and maintaining relationships “I am thrilled to see a lot of 2S-LGBTQ+ community throughout Simcoe and Muskoka, but I didn’t realize how pocketed communities have become - it’s really difficult to find your place without having strong supports or existing relationships within these communities.”    As an avid animal lover (who always wants to see your pet photos) and Queer and Trans History lover, he enjoys meeting folx at events and loves if they introduce themselves with him still being new to the area.

Starting his transition in the 90’s had many more difficulties then we face now when it comes to community and education. Driving for multiple hours or even days at a time to attend conferences and events just to share space with other Trans and Gender Diverse folx. “The lack of visibility I experienced has really fuelled my drive to be visible and vocal today.”

When asked about what Transgender Visibility meant to him? “Progress. Celebration. Love. Resistance. Community.”   Doing his best to make Simcoe a better place by working in the community, these programs didn’t exist during his own transition. Working for the Gilbert Center to assist other 2S-LGBTQ+ has been a helping point for him in reconnecting with his passion and sense of purpose “in a world that tells us what we should and should not be.”

Evan wants to improve Trans visibility by striving to create and educate cisgender people on the issues being faced by Trans people today.  He works to connect with agencies and individuals in order to identify whether they are safe for the community. “ I lend my voice to several committees that are not specific to being trans, and ensure that accessibility and inclusion are taken into consideration for multiple marginalized communities.”

Although Transgender, Evan faces his own type of invisibility is the 2S-LGBTQ+ community.  “Presenting as binary affords some real privileges in my life, but it also leads many to assume that I am cisgendered. I have absolutely faced transphobia in many forms.” Within a community where we should all know not to judge a book by its cover this “rough, bearish package on the outside, and a soft, queer, not-so-binary teddy on the inside” is doing his best to make Simcoe County a better place to live. 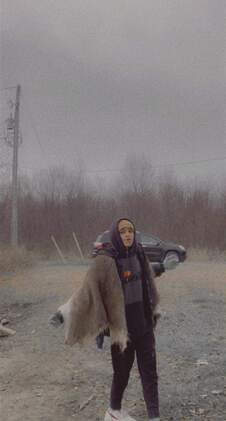 Ter is a Two-Spirit person who is from Chimnissing (Christian Island) and Nipissing (Garden Village) They currently live in Barrie, but see themselves as a nomad. They were previously a recipient of Youth of the Year for Fierté Simcoe Pride in 2018 with The Two-Spirit Youth of Chminissing (Beausoleil First Nation). Ter started the Georgian Bay Two Spirit Pow Wow in 2018 with Thunder Sharma. She has sat on multiple Councils , and sat as Proxy & for discussion panels with the Ontario First Nations Young Person Council. Ter sat as Christian Island Youth Chief for 3 years.

In these roles they have worked to make safe spaces, as they didn’t have the spaces they needed when they were younger. Ter was heavily affected by colonization, christendom, and the changes that it had on the Indigenous communities. Catholicism & Christian gender roles heavily impacted their space in the circle growing up, as elders often fell into catholic based colonial gender roles due to colonization. Ter shared their experience not being accepted into the circle if they weren’t wearing a skirt or dress; and not being accepted into men’s spaces. They said they felt that doing the Two Spirit Pow Wow asserted their position in the community. When asked, Ter said that Two-Spirit Visibility to them was ”showing up as you are and not being heckled for it”.

In their spare time they are apprenticing on working with hides; and identify as a beginner taxidermist and steward to the land. On working with hides, they said that “The greatest privilege I have had is to work with these animals.”

She has also worked with people of all ages, including kids 3-6. On their work with children and youth, they said that “Kiddos taught me how to accept people how they are.” This served Ter as a constant reminder to not take life too seriously and make sure that everyone is welcomed. When creating space these things are a constant reminder to her to make spaces as accessible and accommodating as they can. Their life is about “making people feel as safe and accepted as I wish I was when I grew up.”

Ter shared their love of getting to know people, saying “If people want to come up and share stories, that is cool with me.” She wants to see the world grow into a place where people can be themselves and be loved for who they are.